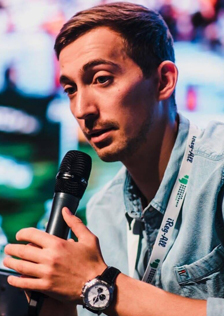 Head of Sponsorship at Parimatch in Russia
Information

As the Head of Sponsorship department at Parimatch in Russia Alexey joined the company in April 2018. Previously he had a career working in advertising for various digital agencies. During Alexei's time at Parimatch, the company signed contracts with several Russian Premier League football clubs (“Rostov”, “Krylya Sovetov”, “Sochi”, “Tambov”, “Akhmat”, “Ural”, “Arsenal”, “Rubin”) as well as the Football National League (“Baltika”, “Khimki”). He also began to work with the Russian Handball Federation, All-Russian Volleyball Federation, Russian futsal association and other leading sports organizations throughout the country. In May 2020 Parimatch won the Marspo sports marketing award for its work with FC “Krylya Sovetov”, having managed to recoup more than half of the contract value with a football club thanks to effective and spectacular work.

Bookmaker ratings
User
rating
A rating of top Bookmakers based on the experiences and opinions of Legalbet users
Rating by odds
A rating of top UK bookmakers based on the margin size calculated from real odds offered on real events
Rating
by lines
The ratings here are based on the variety of betting lines and the available choices for UK punters
Rating
on In-Play Betting
Ranking from bookmakers concerning In-play betting, including the options of bets available
E-Sports
Rating bookmakers by esports betting on CS:GO, Dota 2 and other games
Ratings: Bookmakers
with bonuses
The best welcome bonuses for new customers
Bookmakers
on the go
Bookmakers with adapted versions for mobile devices

Alexey Levinsky: “There is no established sponsorship market in Russia yet”

Why competitions organizers are greedy and how to recoup the costs of contracts with clubs - exclusive interview with the head of the sponsorship department at "Parimatch".
Comments
There’s nothing here yet
Expert

Head of Sponsorship at Parimatch in Russia