How we entered the World Series of Poker broadcasting market

A serial businessman with experience in sports data analytics, sports media, and gambling in general. He is the founder and CEO of BETEGY. The company offers an automated system of content creation for bookmakers and sports media. The service provides personalized visual content based on various data streams. The main clients are ESPN, Tipico, Ringier Axel Springer, Parimatch, Bwin, Yahoo Sports, Sportsbet.io, and Winners.net.

WSOP (The main poker event of the year) is now supplied with our graphics.

As you may already know we entered the US market two years ago. This period has been valuable for us. I have hired several people who can work there and open new doors for us, which has been happening more often lately. The latest deal we have announced is a partnership with Poker Central that owns the PokerGo website. It’s like Netflix in the world of poker shows and tournaments.

They organize their own tournaments and grant licenses to everybody else’s. We have already gone through two tournaments together. These were the Poker Masters in September and the legendary World Series of Poker (WSOP) which is I believe the largest poker tournament in the world. WSOP is like Superbowl for poker players. We have launched a new product specially for these events. No one has ever done anything like this before.

The core of the product is in the graphics. It is visible during filming and broadcasting. It allows us to tell more about the event and a particular player. Everything is data driven as we receive information from different sources, process and visualize it, and make an overlay. 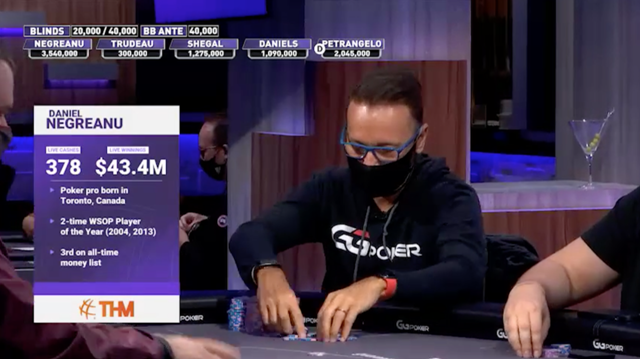 What are the functions of our product? It collects information, optimizes and checks it, and makes calculations. The product creates a data graphic representation, feeding the data into the control system. Then it is driven to a mixing board. Broadcasters can generate data and use it during the shows and events with the help of the tool. 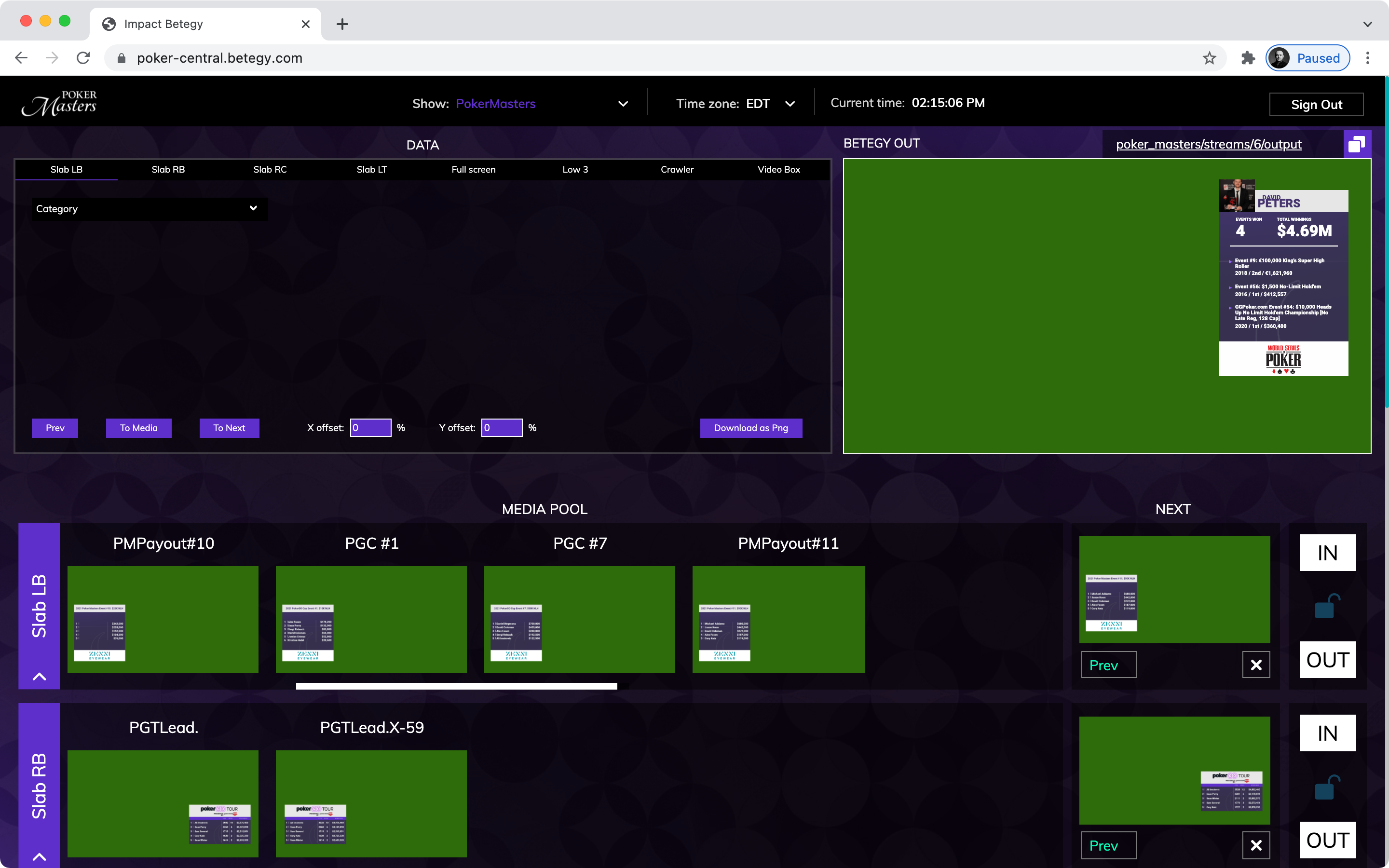 We haven’t made anything extraordinarily new or with advanced technologically. Overlays have been known for a long time. Our product is innovative in other ways. You need to prepare a media pool before making a sports show (or a show of any other kind). You need to know what you are going to say, what will be the topic, because you can’t react quickly. Especially when you have a lot of data on a screen.

So we take the same technology that we used for our other products and connected it to the databases in real time. For example, there is an ongoing conversation during a poker game, so we need to show the statistics of a particular player fast. It should be generated before our decision is made. Using our solution you can choose a player, click “Generate” in real time, and the information will be shown live.

Editors can react to the things happening in a studio or during a poker (or any other) game, leading the storytelling where they want. It saves time and makes content better. Having access to the data you can always say that a player won a particular prize in 1997, the biggest prize in his career and so on.

There are Vizrt and Chyron in the US market. They created the graphics industry. However they represent a title machine. We provide a title machine too, but it’s not software that you need to install, but a cloud based solution. Bloomberg has analogues of the internal developments: a news ticker, changing indicators of the financial markets, everything live. We have provided sports and sports betting with such a technology.

Now let’s talk about something more interesting for the Legalbet audience - the sports betting industry.

For example, there is a deal between a TV channel and a sportsbook. If the sportsbook will connect us to the deal they can show their odds during the broadcast, change them live, show the statistics of the bets ratio and so on. We need the odds feed at least, we can add extra statistics and thus we get an interesting overlay instead of just a simple logo “Make your bet with us”.

We have launched a project with FTN while working with Poker Central. They create content around betting. These are talk shows, which are re-sold to TV channels. For example, there is the “Fade the noise” podcast and “Bets TV” YouTube channel. Experts talk about betting during these shows. We have connected the NFL and all the sports popular in the USA. They used to have primitive graphics, it looked like they’re amateurs. We have given them Bloomberg instead. 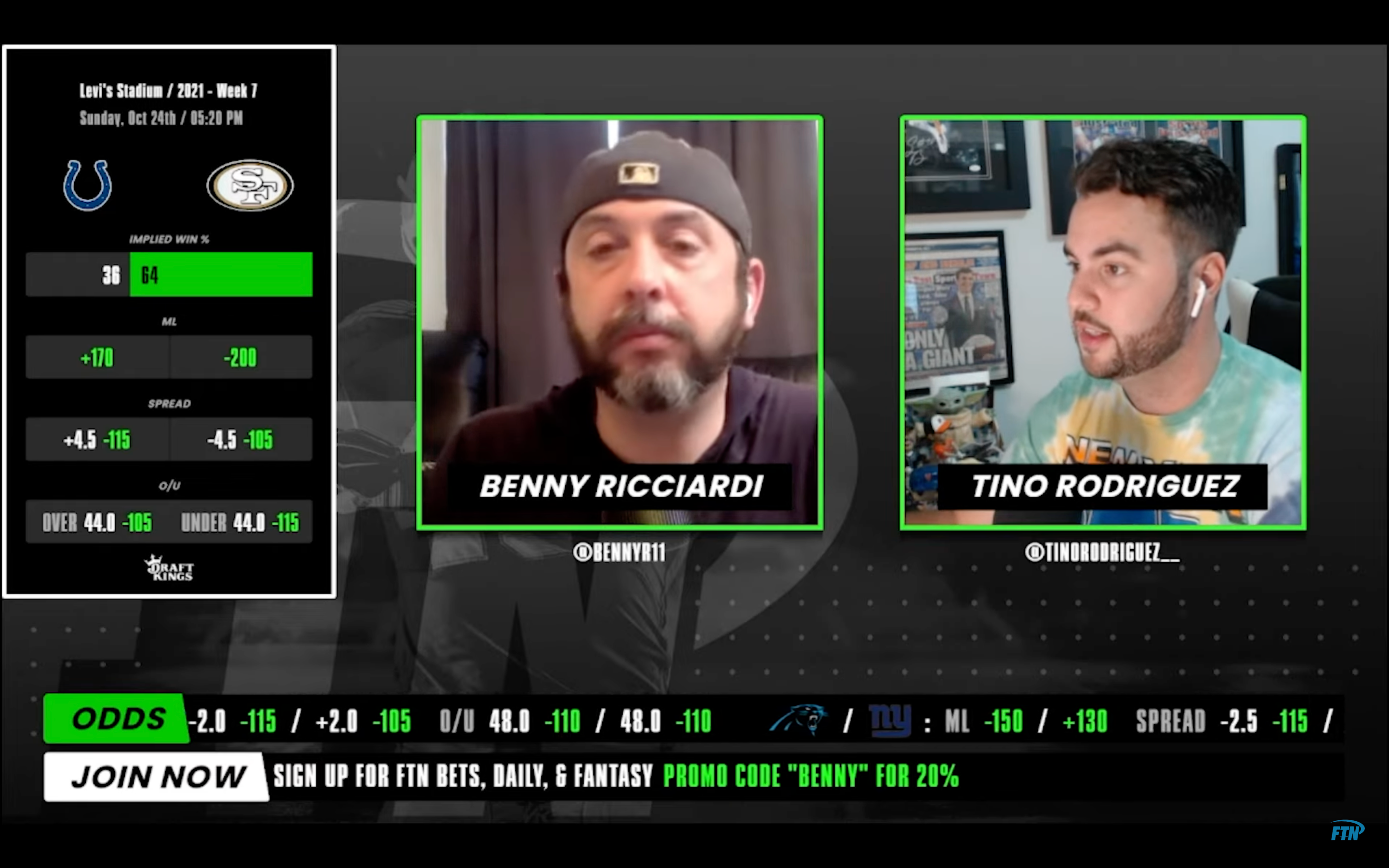 This product is very interesting to me. It opens new possibilities for the market. A Twitch streamer who has a sponsor partnership with a sportsbook can use it.

You need to go through many stages to start working with a client that organizes WSOP. We had contacts of the Poker Central head of sales, for example. Still it’s absolutely not the contacts that let you sell something to them. You show your product, he speaks about it further. It will take a couple of months before the head of product sees it. That’s exactly what happened in our case. Our offer was denied initially. We offered them something like a demo mode then. One-time event for 1/10 of the full price. They agreed and we chose Poker Masters that would start in September.

We were installing things, making necessary settings, getting feedback, developing the product to the best form during the week that the tournament was in progress. Maintaining support 24/7 at such a large event was a challenge for us for sure. We had no response for two days. But then we got a call. In short, they told us that we did a great job answering every question within 15 minutes, something they have never seen in the USA. They offered to integrate with the full contract to WSOP that would start within three weeks. Buildout took six months.

We had to invest into the technical part of the product and to transfer resources within the team to make this project reality. We had to give all the main forces of the company to the product, because it was really important, the other things could be outsourced. Of course, it needed money spending on it. I can’t say the exact margin because it was our first project of that kind. I know my costs. but they are spread amongst the company. The contract is profitable anyway, it fully covers the final event that lasts almost two months. There is an additional royalty if it will be broadcasted again as a replay within a year.

The partnership helps to open doors to other potential clients. That’s probably the most important advantage it provides. This integration may be shown as an example for the top 10 media channels of the United States. They really follow things like this.

I don’t know if all these things sound cool. I’ve outgrown the moment when I was astonished by the fact we were introduced to CBS. When you work over something for half a year and get the result, you don’t think it’s a matter of luck anymore. It’s obvious if you work hard for such a long period. I don’t know how many demos I have had. Three times per day I believe.

Still no one knows about us in the US. We are beginning to be recognized in betting in Europe. For example, one of our current clients (that we haven’t announced yet) have told me recently that he had a conversation with another top level operator that wanted to contact us because they believed we could solve a problem they had.

I’ve been pushing a stone up the hill since 2018. Now I don’t have time to process all the enquiries - the stone is falling down on me. Reaching this turning point is the hardest thing. We’re far from being where I’d like to but it’s getting easier for us. No one needs an innovation you bring to a market. Especially in our industry. Everybody says they want innovations but in fact when you bring it to them you can only hear that everything works without some new things, and it’s better not to do anything.

The point is that integration of an innovative product is a dangerous venture. A person who supports it may be fired if the innovation fails all betting during the Champions League final, for example.

Why is it a bad idea to call yourself a startup in our industry? Because no one wants to trust them and to test new technologies. That’s why you need to grow as fast as possible. Integrations like the one with WSOP help to break a ceiling of glass and to become a recognizable company. Even in the USA. I’m sure that it’s not too late to enter the American market yet. It will be the largest in the world. But you need to be ready for no one waiting for you there and no one will be happy to meet you and to ask for your product. Our total investment has not been recouped yet. It’s a long term project and we will have some profit some day. For now we just need to keep calm and move forward, that’s it.