In this article we will look at the betting odds for the main markets at Qatar 2022. The tournament begins at 7pm on Sunday 20th November at the Al Bayt stadium and finishes just over three weeks later at the Lusail Stadium on Sunday, December 18th. There is an analysis of the odds on the top teams, and we bring you the "to win" odds for each and every group.

Guides on how to start betting

There is no way of knowing who will win the World Cup but some teams have a better chance than others. The best way to know the "true odds" for each potential winner is to use a betting exchange. This is a better guide than using the bookmaker's World Cup odds, although the two will be correlated.

There are thirty two teams going to Qatar for the 2022 World Cup and twelve have a realistic (over 1%) chance of going all the way. The bookmakers estimate that the chances of each winning, as of the 14th of November are:

Odds for England to Win the World Cup 2022

The England odds to win the World Cup in 2022 were about 7/1 over the Summer but have been drifting out to nearer 10/1 as of today (November 14th). This is still too low and should be closer to 16/1. England's odds are always lower than they should be because of the weight of money English gamblers place on England to win games and other complimentary correlated events. This skews the books of the bookies forcing them to offer odds lower than the true value, combined with the fact that they know the bets on England are not coming from "shrewdies" and they can offer any odds they want people will still back it. At the time of writing the odds of England winning are Decimal 10 (so 9/1) at the exchanges. 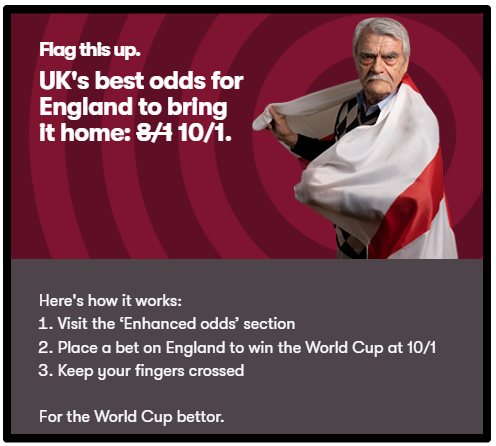 Gareth Southgate's Three Lions will be carrying the flag for England and hoping that just maybe, this year, it's coming home. The best bookmaker odds can be found at 10bet, who have boosted England's odds to 10/1 for a max stake amount of £10.

Betting On The World Cup

Every UK licenced bookmaker will offer odds on the Qatar World Cup, some with dedicated mini sites set up just for this event and others giving games the same coverage as any other game would. What you can be certain of though is that if you want to bet on the World Cup, you will be spoilt for choice. The best three World Cup betting sites that we have found are: 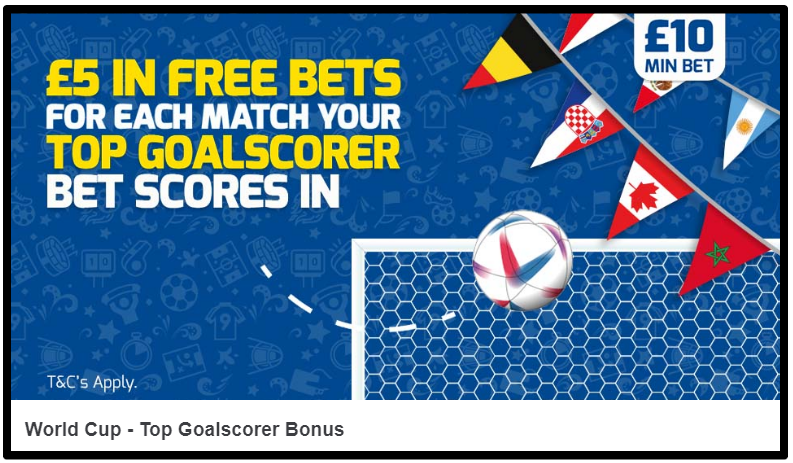 Betfred has created a separate section dedicated to the football World Cup and it is super easy to navigate to the bets that you want, be it outright winner, individual match odds, group winners, or betting on the golden boot. They have guaranteed to be best priced, or joint best priced on every country to win the World Cup outright.

As well as a large range of football world cup promotions 888sport also offer some of the best World Cup odds for each match. What is more you can do everything from their top of the range mobile App, making them a great sportsbook to use for your World Cup bets.

Sky Bet has gone all out for this year's football world cup and has boosted odds on all the matches in the group stage (and are certain to keep that going once the tournament reaches the knockout stage). All their World Cup odds are competitive and as well as that there is a daily shootout giving existing customers Free bets to be claimed and used on any World Cup market you want, with no deposit required.

Below we list the decimal odds of each team winning their respective group.

The top goalscorer market is one of the most closely followed, with plenty of time to make your bets in-play as well as before the tournament starts. One of the most fascinating elements of this market and what makes it so hard to predict is the trade off between picking a great goal scorer in a team who may not even get out of the Group, or a weaker striker but one who is in a cracking team and will likely to all the way, thus giving that striker extra game time to get more goals!

This shall be the 22nd football world cup and the finals of the tournament has 32 teams representing their countries in Qatar. That is a lot of history, but it is not all relevant to this years competition. The nations to have lifted the trophy in the past 20 years are:

The World Cup Top Goal Scorer is eligible to receive the much coveted "Golden Boot". There is a slight difference between the two betting markets, and "to win the Golden Boot" is restricted to just one player, whereas the "Top Goalscorer" can result in a dead heat. Below we list some of the Golden Boost winners from previous World cups.

Although never a top goalscorer in any one World Cup Christiano Ronaldo is notable for having scored in the past four World cups, and in 2018 in one match scored a hat trick. He shall be at his final World Cup this year and looking to add to his tally.